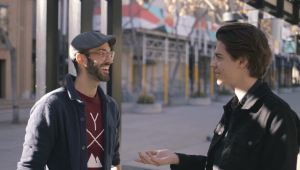 Col Cseke from Inside Out Theatre + Karl Hirzer Associate Conductor

The Calgary Philharmonic Orchestra (CPO) believes that music is for everyone, and one of their recent concerts was a perfect example of this.

On October 20, the CPO partnered with Inside Out Theatre to present The Open Orchestra: A Sensory Friendly Concert, designed specifically for audience members that, for whatever reason, may not be comfortable in a traditional symphonic setting. This was the Orchestra’s first time offering a “relaxed performance,” which is an initiative that has been gaining traction across many different arts organizations in an effort to increase accessibility.

“I’m really excited about it because I don’t feel that anyone should feel as if they don’t fit in in our concert hall, or as if they would somehow be detrimental to other people’s experiences,” says Genevieve Micheletti, a member of the CPO’s first violins section.

Micheletti believes that orchestras today could actually learn a thing or two from the more historical concert environments. “In Beethoven’s day, people would applaud, they would yell if they really liked something, they’d bring picnics,” she says, adding that people enjoyed the easygoing atmosphere. “I think a lot of the things that orchestras now call ‘trying something different’ are actually going back towards the past more than anything.”

Saturday’s relaxed performance was led by CPO Associate Conductor Karl Hirzer and featured a sampling of the orchestral repertoire, as well as the occasional film score. “I think any music that we’re passionate about is great for this,” Micheletti says. “There’s some music that we play that’s traditionally more audience-friendly, but…music really does express things that we can’t verbalize, so I don’t think there’s any specific kind of music that’s best.”

During a relaxed performance, audience members are able to move around, make noise, come and go, etc. — behaviours that typically aren’t allowed as they can distract the musicians. While she doesn’t deny that performing onstage requires a certain degree of concentration, Micheletti says that a mutual understanding is key to delivering a successful experience for all involved in this type of event. “I think having that expectation in the concert hall lets us do our best, and lets the audience enjoy themselves.”

Out in the lobby following the CPO’s hour-long performance, it quickly became evident just how impactful the experience was for many of the concertgoers that afternoon.

According to one, it was significant for the young, aspiring musicians that he brought with him to the show: “It’s a chance to get them inspired about what they can do.”

And for a particularly grateful patron, the format made it possible for her daughter to finally attend her very first performance. “It was amazing, absolutely amazing. It’s hard not to tear up because she could actually come and feel what the music is like…she loves music. It’s nice because it’s inclusive.”