Music is always radical. No matter what kind, be it classical, contemporary, blues, jazz, or pop, music takes us places words and images cannot.

This weekend, we have music by Mendelssohn, Dvořák, Bach and Liszt, and the cohesive element of the programme is the symphonic poem, an orchestral work that evokes or illustrates a poem, novel, painting, landscape, or other non-musical source. This style of composition began is the first half of the 19th century, largely in response to a general sentiment that the traditional symphonic form was perfected by Beethoven, and that any subsequent attempts would be inferior.

This weekend, we visit Fingal’s Cave in the overture of Mendelssohn’s musical tone poem The Hebrides. An early harbinger of the symphonic tone poem, the overture doesn’t specifically tell a story but instead brings to mind a mood. In addition to composing, Mendelssohn was a painter and an admirer of literature, languages, and traveling — a true Renaissance man of the Romantic Age. He was also a virtuosic improvisational pianist and a popular conductor of opera. Mendelssohn combined all of these interests in his music, which ran the gamut from the classical influences of Bach (whom he revered) to chamber music, symphonic music, and oratories.

Liszt was instrumental in the creation and acceptance of “programme music,” which represents something tangible, or a specific idea. He could also be considered the “rock-star” of the early and mid-1800s. He looked like Roger Daltry of The Who, and was a brilliant, pensive Byronic man. Women squealed over his dropped gloves and handkerchiefs like contemporary teenagers. At one point, “Lisztomania” spread across Europe, and he found himself with a following that brings to mind the screaming teens around the Beatles — only the manners of his audiences were more refined.

Less known was Liszt’s humanitarian work. He supported many causes and by his 40s, had accumulated enough wealth that all of the proceeds from his performances were donated to charity after 1857. When he found out about the Great Fire of Hamburg, he gave concerts in support of the thousands of homeless in the city.

Dvořák was also a revolutionary artist in many ways. He included and based much of his music upon the nationalist, folk, and musical traditions of the people of Eastern Europe, especially his native land in the Austrian Empire, now known as the Czech Republic. He was mentored by Brahms and lived in the United States for five years, where he wrote his Symphony from a New World. Living in New York, he was deeply moved by the different rhythms of American music. He thought the music of Native and African-Americans would be a perfect base for an “American” style. His work, in turn, influenced many American musicians, including Gershwin and Copeland.

In looking at Dvořák, Liszt, Mendelssohn and other revered artists, the question is always “what is it that makes an artist great?” I believe that any human artistic endeavour is merely an attempt by the artist to capture or re-create the immensity of life and the beauty of creation.

Finally, this weekend’s programme also includes a piano concerto by J.S. Bach. I watched a YouTube video yesterday by Rick Beato about this legendary composer, and what makes his music relevant today. His answer: “Johann Sebastian Bach’s limitless musical explorations expressed the order of the physical and biological universe in exquisite mathematical precision and detail.” This perfectly describes my sentiment around great art. He continues: “His music was written to express divine beauty in all creation and his influence on all successive composers is limitless and still ongoing today.…”

Well, there you have it. I think that’s the most succinct and beautiful expression of the relevance of art, on any canvas, that one could proffer. I hope you join us this weekend for an in-person celebration of this expression of the greatness of music and creation.

I founded the Brussa Brava! Legacy Programme 11 years ago to bring high-calibre guest artists to perform with the CPO. This week, I am sponsoring a wonderful, dynamic conductor from South Korea, Maestra Eun Sun Kim.

A dynamic and talented opera conductor and pianist, Kim is first female named to the position of Principal Guest Conductor of the Houston Symphony. She has been mentored by such luminaries as Daniel Barenboim and Kirill Petrenko, and has won rave reviews for her conducting appearances. I am both proud and delighted she is here, in Calgary, to lead us.

Pianist Konstantin Shamray is also performing. We live in an age where the world is small and even a Russian pianist who came to prominence in Australia can perform in Calgary — everything is mixed up and wonderful.

Together, sharing our talents and our appreciation, we are more powerful and have a broader vocabulary to communicate with, no matter the form. There are no limits. We have only to listen to the world and the music around us learn about ourselves, our earth, our lives, our hopes, our dreams and our visions for “A New World.” The sounds of the earth and the heavens will inform our futures.

Dvořák, Liszt, Mendelssohn and Bach would be proud. 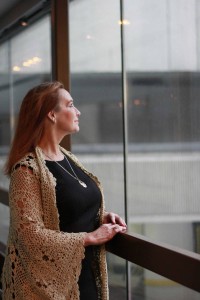