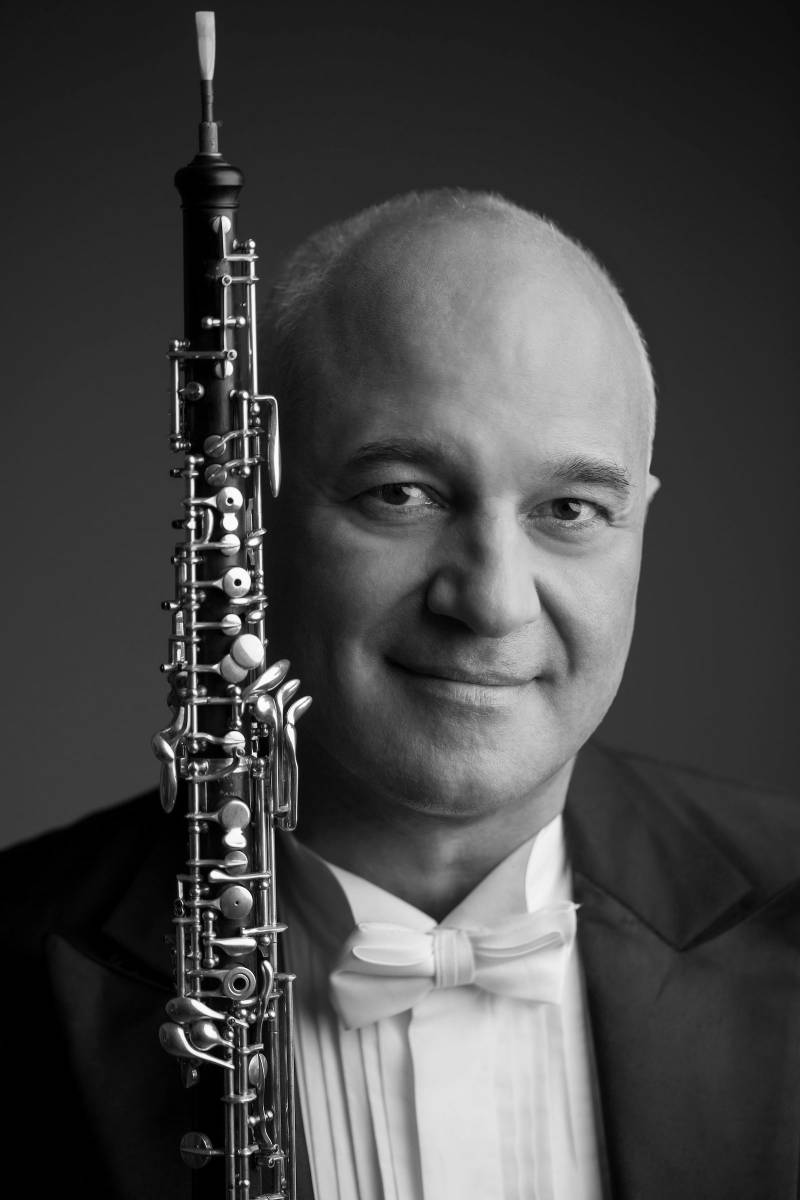 Alex Klein, who joined the Calgary Philharmonic Orchestra in November of 2018 as Principal Oboe, has a different backstory than the nine other musicians who became members of the CPO this Season. For starters, this isn’t his first orchestral position.

Klein is one of the world’s most acclaimed oboists, most notably having served as Principal Oboe of the Chicago Symphony Orchestra (CSO) — widely recognized as one of the top orchestras in the world —  for nine years, and winning five Grammy Awards. However, there’s more to Klein’s story, and his transition to the CPO, than audience members may realize. “I am an immigrant,” he says. “I am a Latin American from Brazil, my wife is from Costa Rica, my children were born in Brazil. I have a green card, so I can work legally in the U.S., but my family cannot live with me under the current immigration laws there. We had been separated for two and a half years…. It was very painful for my children, and it was very unfair to my wife, to care for both of them on her own.”  Klein, whose children are eight and 10 years old, says his family is his priority, so he purposely looked for employment north of the border, in Canada. “And, lo and behold, the Calgary Philharmonic was looking for a Principal Oboe!”

Klein’s wife and children had been living in Montreal for a few years, which made moving to Calgary together much easier. “The Calgary Philharmonic has a very fine reputation,” he says, adding that he is grateful to be here. “There are a lot of positive things about living here, and perhaps people who live here or play here don’t notice because they don’t have an immediate point of comparison. Everything you guys have invested in creating a society that is welcoming, that values how much people work, not where they are from, is awesome. And Calgary and Canada are to be congratulated for their diversity, and for trying to run a clean show.”

With his new role at the CPO, Klein brings “orchestral musician” back into his already fruitful and multifaceted career. His packed resume includes faculty positions at Chicago’s DePaul University, the Aspen, Mostly Mozart and Sunflower Music festivals, and the New World Symphony, as well as his active career as an oboe clinician, conductor, and international music festival director.

It’s evident when speaking to Klein that he is overjoyed about his position with the CPO and does not in any way consider it to be a step back. He says the Chicago Symphony has a stellar reputation for being a world-class orchestra, but that doesn’t mean Calgary isn’t. Klein points out that two woodwind musicians from the same university were recently hired as Principal Bassoon and Principal Clarinet in Chicago and Calgary, respectively. “As orchestras enrich themselves with new players, things tend to sort of equalize, because there are not enough orchestras to get everybody a job,” he says. “What ends up happening is that a lot of people with stellar training end up being distributed evenly across the board.”

Klein says for him, his life and everything he cares about, his move to the CPO is an upgrade. “I don’t have anything else to prove to anybody,” he adds about his career as an orchestral musician. “So, I am here with immense pleasure, and very thankful.”

Klein’s gratitude may also stem from overcoming his long-term battle with focal dystonia — this debilitating condition was the reason Klein discontinued his role as Principal Oboe in Chicago back in 2004. “Focal dystonia just means that a focalized point in my body, mainly being two fingers in my left hand, does not receive the entire information from the brain. And that leads to all sorts of things, either the fingers don’t work, or they work at the wrong time,” he explains. “It’s a nightmare, and it’s destroyed the careers of a great number of musicians…. We still don’t know how exactly we get this, so it’s a little bit alarming.”

Klein spent more than a decade adapting to his condition. He adapted his technique, learning how to play sideways, with his fingers similar to a saxophone, in order to trick his brain. Eventually, he regained his career and reapplied for his old position in Chicago, winning that audition a second time. While he didn’t end up staying in Chicago, Klein is pleased with what the successful audition demonstrated about his recovery. “These auditions are extremely competitive, and that is something I’m very proud of — to  conquer something like this, it is a sign of reconquering my career,” he says. “I still have focal dystonia, I’m still considered a victim of this thing, but I learned how to play again and subsequently won the audition in Calgary.”

Klein appreciates that the CPO was willing to give him a chance. “It takes a lot of courage and humanity for an organization to hire somebody who’s different, so I’m thankful, enormously thankful, that the Calgary Philharmonic has looked to me, to me and my family, to bring us here. But, also, I am humbled at the opportunity I have to play in a great orchestra again, and the opportunity to serve this community with our music and our love expressed through it.”