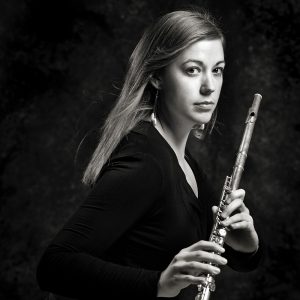 Sara Hahn-Scinocco, Principal Flute of the Calgary Philharmonic Orchestra (CPO), hasn’t been playing much music recently — and for good reason. Just three months ago, shortly after beginning her 13th Season with the CPO, Hahn-Scinocco gave birth to her first daughter. This week, though, she will be back onstage to perform Mozart’s Flute and Harp Concerto in C Major at the Mozart’s Birthday Party concerts on 25 and 26 January.

“I had agreed to do this long ago, I think before I was even pregnant,” Hahn-Scinocco explains. “And I don’t really like to renege on my promises if I don’t have to.” But was there ever a point when she didn’t think she could make it happen? “Yes, several times,” she says. “It was really hard to predict, even in the early weeks, what kind of baby she was going to be, and what it’s like to be a mom. But I have a super supportive husband and my mom is going to come out and help, so I thought, ‘Yeah, let’s just go for it and hope for the best!’ ”

For Hahn-Scinocco, the biggest challenge has been finding the time to play, but it helps that it’s not her first time performing the concerto. “Just in the last month or so, I’ve been practising again,” she says. “For any professional, it’s like riding a bike — it comes back quickly…. We don’t get many opportunities to perform concertos, so it’s one of those things that you’ve got to just take advantage of when you can.”

Hahn-Scinocco is one of a small handful of CPO musicians performing concertos this Season. “We all grow up with aspirations to be more in a soloistic role in our careers, and when you settle into the orchestra, it can become sort of regular,” she explains. “So it’s nice to challenge yourself and do something different and new and be more in the spotlight, be more recognized.”

She also describes the sense of accomplishment that comes with rising to the occasion. “It is more stressful and it is something that we don’t do on a regular basis, but it’s quite rewarding when you do it. It’s like running a marathon, I guess, right?” she says. “I have to imagine that — I’ve never actually run a marathon!”

[Hahn-Scinocco will be performing alongside Heidi Van Hoesen Gorton, Toronto Symphony Orchestra’s Principal Harpist. Mozart’s Birthday Party will also feature the composer’s first and last symphonies (Symphony No. 1 and Symphony No. 41, “Jupiter”). These performances are co-presented with One Yellow Rabbit as part of the High Performance Rodeo.]