Conductor Ivars Taurins will lead the Calgary Philharmonic Orchestra during Handel’s Messiah on December 11 and 12. On Sunday, December 13, Taurins will become Handel himself for the annual Sing-Along Messiah. Here’s a Q&A with the renowned baroque conductor.

You’ve conducted Messiah over 200 times. How do you bring a fresh take to each performance?

That’s part of my profession. It’s like an actor who has to put themselves into the character and into the play. What’s interesting about music and theatre is that you are recreating that moment every time you have to. Compared to a piece of art, you do it, and it’s done. So that’s, in a way, a kind of training we undertake of getting into the physical space and the head space in the right way.

The piece always inspires. You’re bringing it off the page, as do all the instrumentalists and vocalists. I never think about it as “oh here goes another performance.” You obviously get tired, and so it’s the energy of getting back up into the saddle and doing it one more time. But once you’re going and once you’re into the music then it carries you. 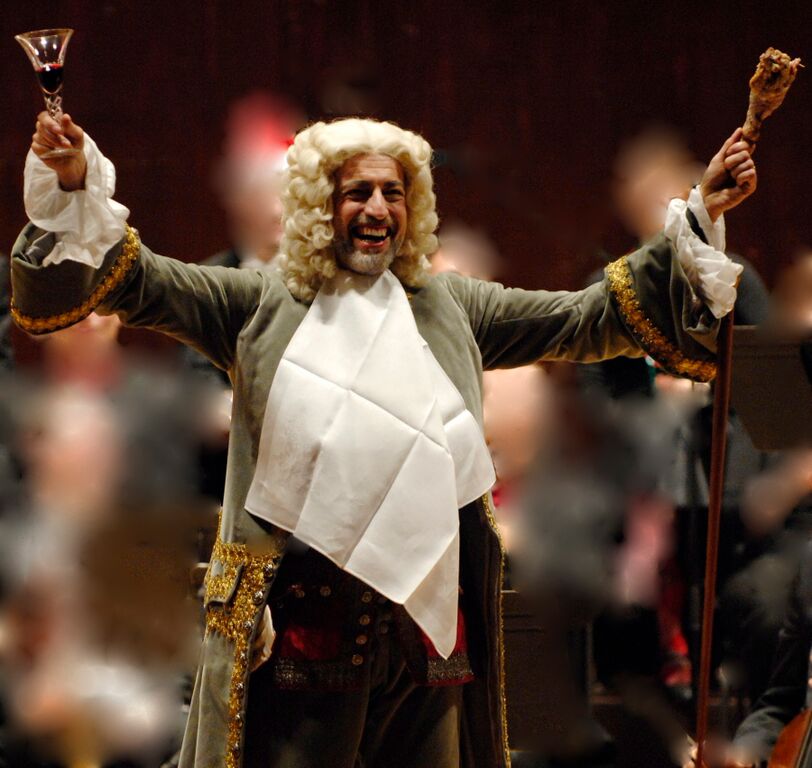 Of the 200 performances, is there one that really stands out for you?

There was one we did with Tafelmusik many years ago at a big Roman Catholic cathedral that had just been built in Markham, Ontario. It was an old world, huge thing built of marble. And it was like all the great cathedrals, it wasn’t actually finished when we were playing in it. The experience of playing Messiah in that huge cavernous space to the glory of God

[was special]. When we finished the performance, the main church bell rang. It was like this deep, bonging thing. It was wonderful.

In a recent interview with CBC Ideas, you delve into all the secrets you’ve learned about Messiah. Are you still learning more about the piece’s history and contexts?

Always. You look at things in a new way, either through your daily experience, your life experience, or your learned experience through readings. In the last few years I delved more into the librettist Charles Jennens and his contribution, which we overlook so much. We think “oh Messiah is Handel’s great masterpiece” but he couldn’t have done it without Jennen’s amazing text. So there’s always something new to find. Or there is some new turn of phrase or harmony that hits you in a different way as it’s being sounded. It’s an emotional thing.

Like last week I was doing Bach’s Christmas oratorio. The opening of Part Two has this wonderful Shepherd’s Symphonia; it’s a beautiful, sweet piece. As I was in the middle of it I realized that it was my father’s birthday. He passed away two years ago. And so right in the middle of that poignancy of that piece, it hit me. I had to do everything I could to keep it together. But it coloured, therefore, how I interpreted that piece, and how I showed the phrases, how we worked together at that moment. So the same thing happens in Messiah.

On Sunday you will be donning the wig and costume of Handel himself for Sing-Along Messiah. How did this tradition start?

30 years ago Tafelmusik had the idea of doing a sing-along Messiah in Toronto because there really hadn’t been one. The Toronto Symphony used to do one many years back, but no one was doing it at the time. So our managing director asked me what I thought. At the time, I thought I’m really busy enough with the concert performances. I personally had some conflict about doing it. It felt to me a little campy. So I tried to put her off by saying “The only way I’ll do it is if you let me get dressed up as Handel.” Well I cooked my goose because she said “What a brilliant idea!”

So I did that. But then very quickly I figured out that this was an excellent way to present the piece to an audience that will partake in it, to have the composer there in real life. So I studied everything about him, about his life, about the way he spoke, his mannerisms, his wit, and his temper. Roll that all up into one and Handel therefore acts at the sing-along as a conduit back to the 18th century. He’s also a kind of icebreaker. He breaks any tension the audience might have about singing with a professional orchestra and choir. You see some sing-along performances where the conductor turns around and he looks very stern.

But Handel, through his kind of wonderful, witty, sarcastic Saxon way, clears that all away with the opening shtick that he does and allows the audience to just have a good time. And yeah, they might be yelled at, like if the tenors are dragging or something. Or if there’s a husband sitting with his wife in the soprano section, Handel is sure to say something. It’s all in good humor. The really amazing thing, which I’ve realized over the years, is it’s not just fun and games. This piece is dear to so many people that to be part of it and to feel the emotions that we do on stage, and feel it more than just a listener but to partake in it, they take the journey in us.

By the end, every year, people leave the place glowing, and I see that. Or their eyes are filled with tears of joy. That’s very special to me, to bring that every year. It has become a kind of phenomenon in Toronto. In Calgary as well. The Calgary audience has been doing it maybe seven or eight times, and they’ve grown to know what this is all about. And they want that to happen. But it is this incredible phenomenon that has developed. It’s one of the traditions. People say “We’re going to go to The Nutcracker, or Dickens’ Christmas Carol, or we’re going to join Handel at the sing-along.” And that’s very humbling to me that it’s gotten that status.