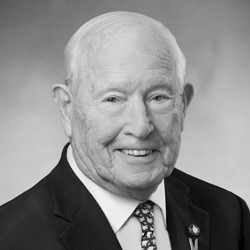 Dr. John Lacey arrived in Calgary from Britain, newly married, in 1956. Following a 15-year career with a local oil company, Dr. Lacey started his own international engineering and geological consulting company, which he ran for 45 years before retiring. Dr. Lacey is a longtime supporter and active participant in the Calgary Philharmonic, including as co-founder and sponsor of the annual Cork and Canvas fundraiser, Chair of the Friends of the CPO and Musical Heritage from 2000-2013, founder and sponsor of the Naomi and John Lacey Virtuoso Program, and honorary chair and donor to the Ad Astra Capital Campaign. Dr. Lacey is also a Director for Contemporary Calgary Art Gallery, founder and sponsor with the National Gallery of Canada biannual Lacey Prize for artist-run galleries in Canada, Chair of MRU Conservatory Advisory Committee, and was Chair of Musical Heritage from 2000 to 2013.