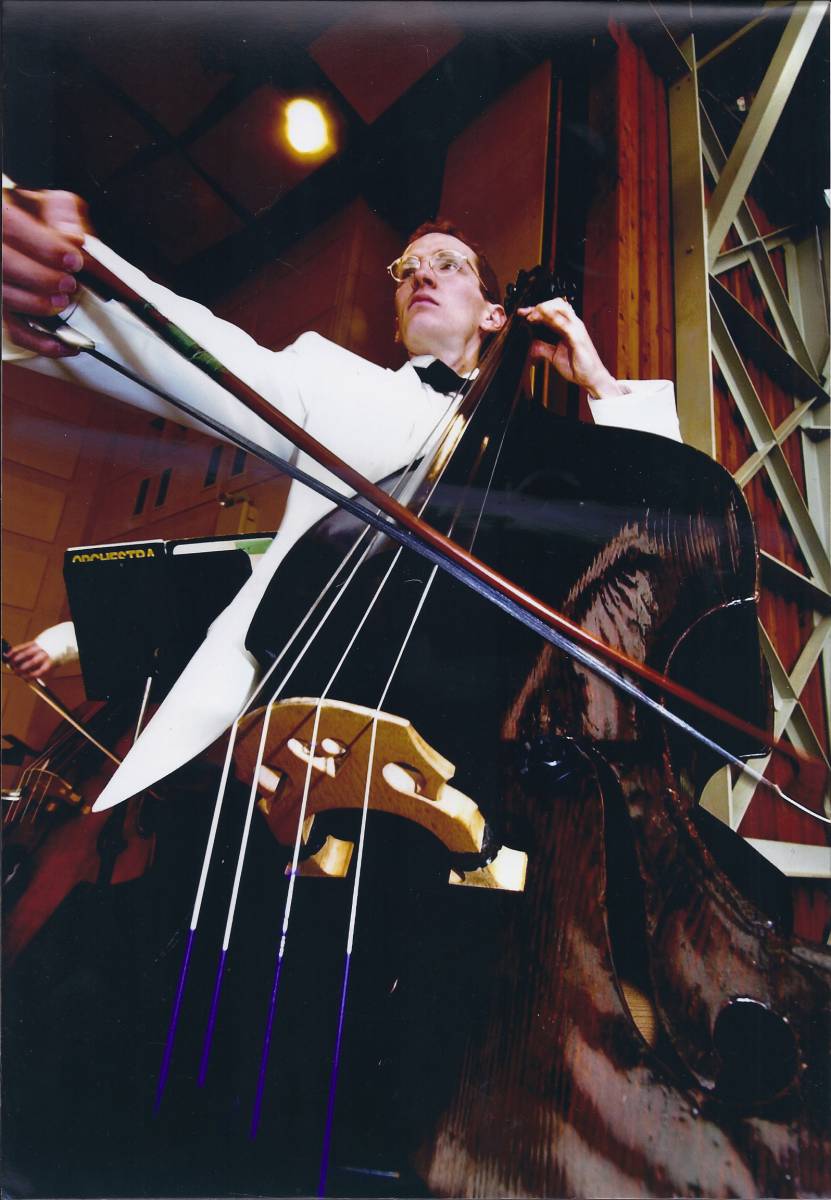 How old is your bass and where was it made?

A good question — it has a label which says “Gibertini Antonio / Fece in Parma Anno 1862”. 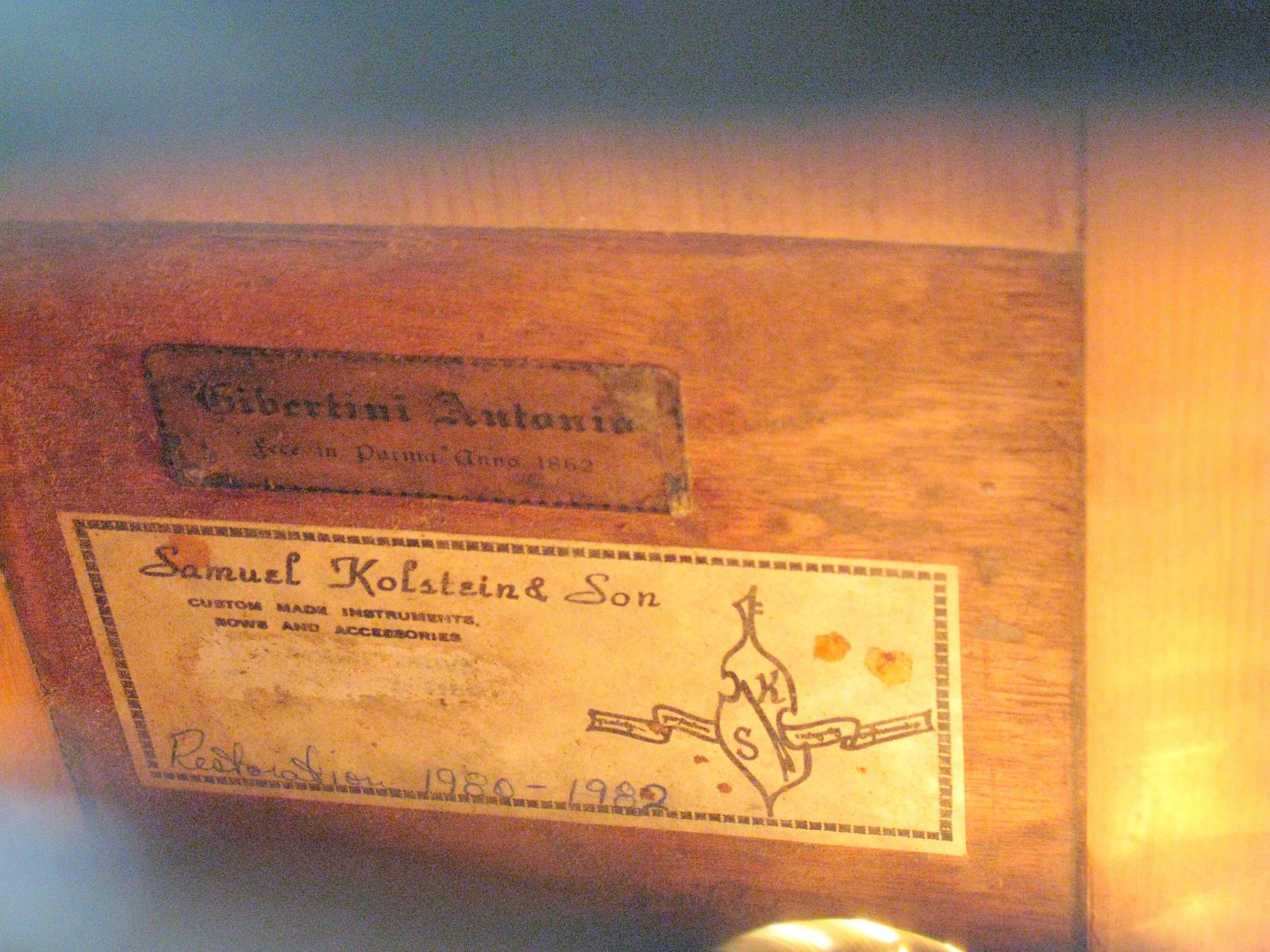 Luthiers I’ve shown it to have told me that, unfortunately, the label is almost certainly a fiction – as labels in old basses very frequently are. One luthier estimated 95% fake, 5% real.
It’s quite probable that it was made in the late 19th century in Italy – when people ask, I’ll often tell them that, though somehow it’s more satisfying to give them a more specific name, place, and time. We like to have a great story, along with a great instrument. I suppose that’s why fake labels are so common.

Can you tell me something about the significance of these stickers on your bass?

Besides that fictitious Gibertini label, there are two labels which are authentic. These were placed by luthiers who did extensive repair work. They would have detached the top of the bass, opening it up, sealing cracks and installing cleats and other support materials to reinforce its structure. One says: “Samuel Kolstein & Son / Restoration 1980-1982”. That shop is still going; it’s located in Brooklyn, NY, where Sam’s son, Barrie, now runs it.
The older repair label says “Manuel Arean / Fabricante de instrumentos de cuerda / Reparaciones en general / Buenos Aires”. It’s hard to guess when that repair may have happened. The shop doesn’t seem to exist today; the label looks quite old. 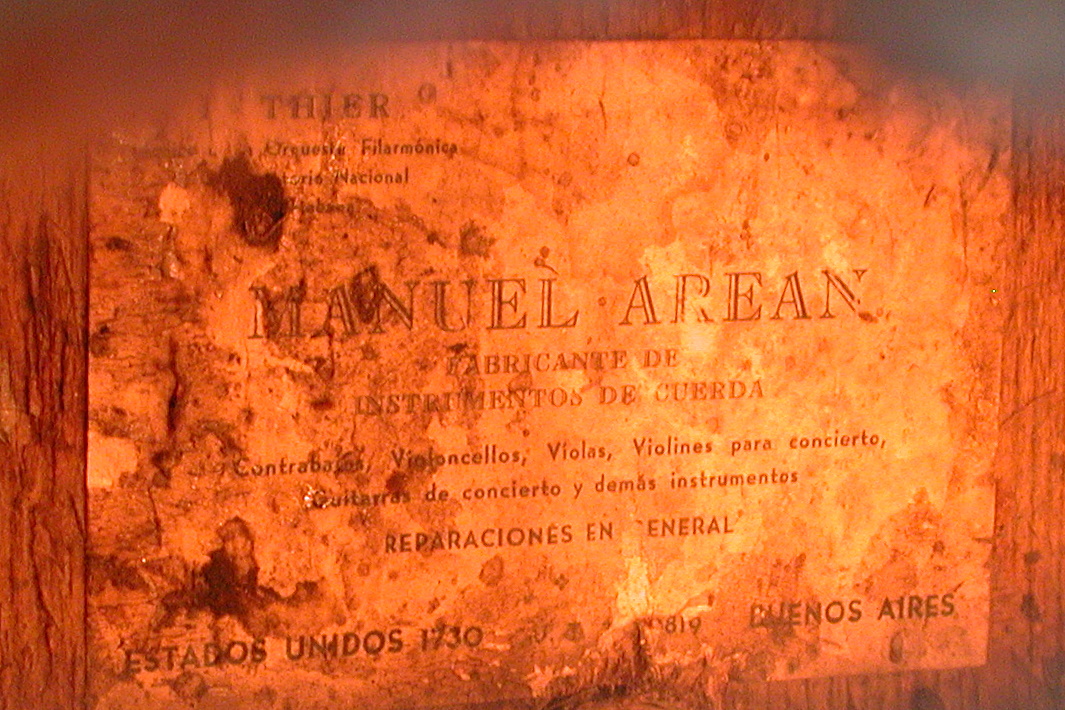 Who made your bass  and is there any significance to the maker of your bass?

Again, it’s hard to say. Antonio Gibertini, the “fantasy” maker of my bass, was active in Parma from 1830-1833, in Genova from 1834-1845, then again in Parma until his death in 1866. The number of instruments he made is considered small and if he even made a bass is unknown.

What is the connection to Buenos Aires?

That older repair label suggests it spent a stint in Argentina; it would be fascinating to know precisely when. Buenos Aires has long been a great cultural capital, and a destination for musicians (and instruments) from all over the world. My bass may well have lived there during the “golden age” of tango, which is generally considered to have been 1935 to 1955.

Where did you get the bass from? How long have you been playing this bass? Is there anything different about this bass?

I purchased it from Robertson & Sons in Albuquerque, New Mexico, in 2000, and I’ve played it ever since. In 2001, I had a C-extension added, which extends the range down to low C. (This is quite common on modern basses.)
If you look closely at the basses in our Calgary Philharmonic Orchestra section, you’ll notice just how varied they are, in colour of varnish (mine is quite dark) as well as size and shape (mine has sloped shoulders, “gamba corners” and a flat back; others have pointy, “violin corners” and rounded backs). The back and sides of my bass are made of Italian walnut, rather a rare material, while the front (more typically) is spruce.