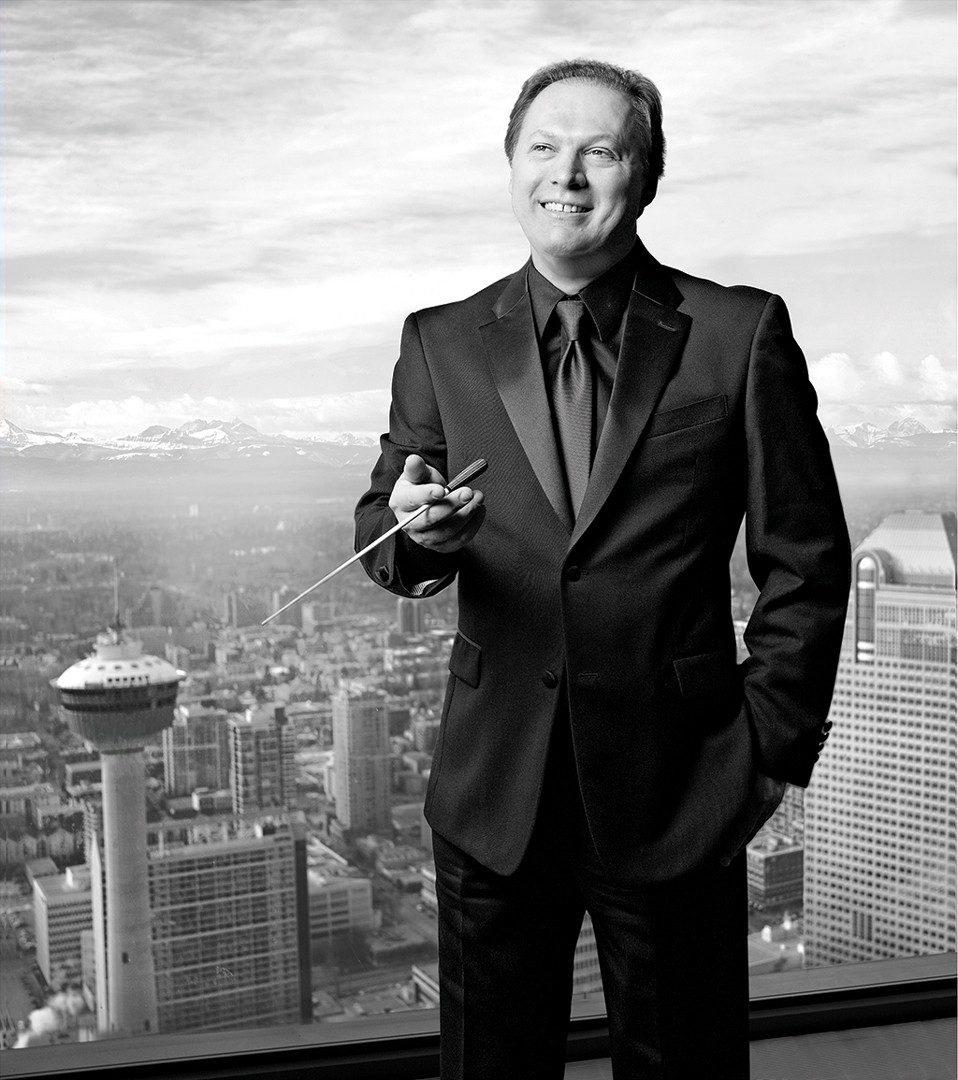 After 10 Seasons, Roberto Minczuk was named Music Director Laureate of the Calgary Philharmonic Orchestra starting in the 2016/2017 Season.

A protégé of Kurt Masur, Brazilian-born Roberto Minczuk is a conductor and musician of international prominence. He is the recipient of several distinguished awards and prizes including a 2004 Latin Grammy for best classical album, Symphonic Jobim; a 2004 Emmy for the program New York City Ballet – Lincoln Center Celebrates Balanchine 100; and a 2001 Martin E. Segal Award which recognizes Lincoln Center’s most promising young artists.

He has received numerous honours in his native country of Brazil, including two best conductor awards from the São Paulo Association of Art Critics and the coveted title of Cultural Personality of the Year. The Academic Orchestra of the Campos do Jordão International Winter Festival (of which he was Artistic Director) was the Carlos Gomes prize-winner and the CD recorded during the 2005 Festival garnered the TIM Award for best classical album.  In 2009, he was awarded the Medal Pedro Ernesto, the highest commendation of the City of Rio de Janeiro; and in 2010, he received the Order of the Ipiranga State Government of São Paulo. In 2014, under his baton, the Brazilian Symphony Orchestra won the Silver Lion Prize at the Cannes International Festival and the Clio Awards for its publicity campaign, Classics Behind the Classics. The campaign was also a finalist of the New York Festivals World´s Best Advertising awards. Following these achievements, in 2015, the Brazilian Symphony under Roberto Minczuk’s baton released the app Clássicos Animados (Animated Classics) that won the FWA digital prize as Mobile of the Day.

Maestro Minczuk is firmly established as one of his generation’s brightest talents. He debuted in the United States conducting the New York Philharmonic in 1998 and in 2002 he was invited to assume the post of Associate Conductor, a post last held by Leonard Bernstein. Minczuk has conducted 93 orchestras throughout North and South America, Europe, Asia and the Pacific. His North American engagements of the last seasons include these orchestras: New York, Los Angeles, Philadelphia, Cleveland, Minnesota, San Francisco, St. Louis, Atlanta, Baltimore, Dallas, Montreal, Toronto, Ottawa and Calgary. In Europe, his engagements have included the orchestras of: London, Wales and Scottish BBC Symphony Orchestras; London, Liverpool, Oslo, Hallé, Rotterdam, Bergen, Barcelona, Birmingham, Bournemouth, Odense, Helsinki, Netherlands, Ireland, France, Lyon, Belgium, Lille and Scotland. He has conducted the Israel Philharmonic Orchestra as well as the Tokyo Philharmonic and Yomiuri Symphony.

In 2006, he filled in for an ailing Kurt Masur and assumed responsibility for much of the London Philharmonic Orchestra’s U.S. tour period, winning major critical acclaim and accolades. In 2009, Minczuk conducted, for the first time in the world, the complete Bachianas Brasileiras cycle in only one concert with the Tokyo Philharmonic.

As a child prodigy, Minczuk was a professional musician by the age of 13. He was admitted into the prestigious Julliard School at 14 and by 16, he had joined the Orchestra of the Municipal de São Paulo as soloist horn player. During his Juilliard years, he appeared as soloist with the New York Youth Symphony at Carnegie Hall and the New York Philharmonic Young People’s Concerts series. Upon his graduation in 1987 he became a member of the Leipzig Gewandhaus Orchestra at the invitation of Maestro Kurt Masur. Returning to Brazil in 1989, he studied conducting with Eleazar de Carvalho and John Neschling. He won awards as a young horn player, including the Mill Santista Youth Award in 1991 and I Eldorado Music.

His three recordings with the Calgary Philharmonic Orchestra include Rhapsody in Blue: The Best of George Gershwin, and a full cycle of Beethoven Symphonies. 1 & 3 and 5 & 8 have been released with more to come. With the London Philharmonic, he recorded works by Ravel, Piazzolla, Martin and Tomasi (released by Naxos); seven CDs with the São Paulo State Symphony Orchestra including the complete Bachianas Brasileiras, Brazilian Dances and Beethoven (released by BIS); four CDs with the Academic Orchestra of the Campos do Jordão International Winter Festival including works by Dvořák, Mussorgsky and Tchaikovsky; and one CD with the Brazilian Symphony Orchestra including pieces by José Maurício Nunes Garcia. In April 2010, he recorded a DVD with the Chamber Orchestra of Philadelphia featuring the premiere of Hope: An Oratoria, composed by Jonathan Leshnoff. In June 2010, the CD accompanying BBC Music Magazine featured Minczuk conducting the BBC National Orchestra of Wales in Tchaikovsky’s Italian Capriccio. In June 2011 he made a recording with the Odense Symphony of Poul Ruders’ Symphony No. 4 which was featured as a Gramophone Choice in March 2012. Minczuk’s recording of Bachianas Brasileiras with the São Paulo State Symphony Orchestra is considered by Gramophone Magazine as one of the best recordings of this work in the world, with Gramophone stating that “Minczuk’s is the only real choice for the complete Bachianas – his set, with most alternate versions, is at least a match for its rivals where not demonstrably better, and with finer sound.” (March, 2012).

Maestro Roberto Minczuk lives in both Calgary and Rio de Janeiro with his wife Valéria and their four children: Natalie, Rebecca, Joshua and Julia. 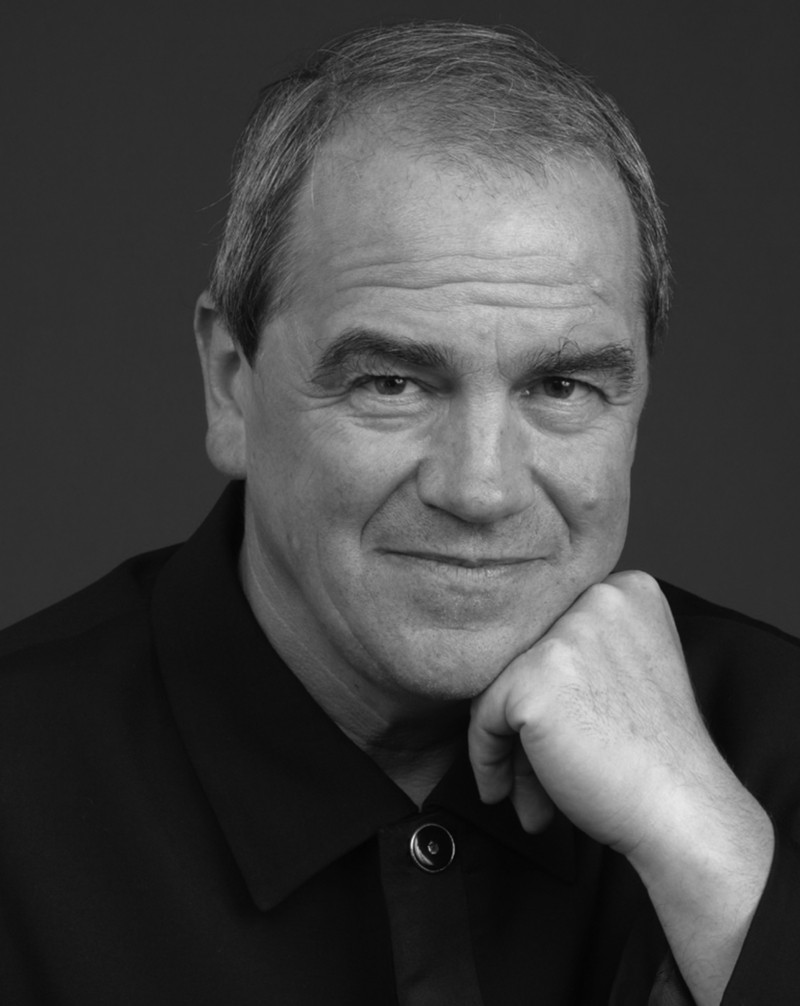 Known for his wide range of repertoire and creative programming, the distinguished Austrian conductor Hans Graf is one of today’s most highly respected musicians.

Appointed Music Director of the Houston Symphony in 2001, Mr. Graf concluded his tenure in May 2013 and is the longest serving Music Director in the orchestra’s history. He currently holds the title of Conductor Laureate. Prior to his appointment in Houston, he was the Music Director of the Calgary Philharmonic for eight seasons and held the same post with the Orchestre National Bordeaux Aquitaine for six years. He also led the Salzburg Mozarteum Orchestra from 1984 to 1994.

Hans Graf is a frequent guest with all of the major North American orchestras. His recent and upcoming guest engagements include appearances with the Cleveland and Philadelphia Orchestras, the New York and Los Angeles Philharmonics, the Boston, San Francisco, St. Louis, Cincinnati, Detroit, Dallas, Baltimore, Vancouver, Milwaukee and National symphonies and the St. Paul Chamber Orchestra among others.  Mr. Graf made his Carnegie Hall debut with the Houston Symphony in January 2006 and returned to Carnegie leading the Orchestra of St. Luke’s in March 2007. He and the Houston Symphony were re-invited to appear at Carnegie Hall in January 2010, at which time they presented the New York premiere of The Planets – An HD Odyssey, featuring the orchestra playing Holst’s famous work, The Planets, accompanied by exclusive high definition images from NASA’s exploration of the solar system. Mr. Graf and the Houston Symphony returned to Carnegie Hall again in May 2012 to participate in Carnegie’s Spring for Music festival with an all-Shostakovich program.

In October 2010, Mr. Graf led the Houston Symphony on a tour of the UK which included performances in Birmingham, Edinburgh, Leeds, Manchester and two performances at the Barbican in London. And in June 2012, the Houston Symphony, led by Mr. Graf, was the first major American orchestra to appear at the Festival of World Symphony Orchestras in Moscow, presenting two programs which included Bruckner 9, the Russian premiere of John Adams’ Doctor Atomic Symphony, and the first performance in Russia by an American orchestra of Shostakovich Symphony No. 11.

During the summer of 2013, Mr. Graf returns to the Salzburg Festival for three different performances, including conducting a new work by Austrian composer Gerhard Wimberger with the Mozarteum Orchestra and leading an unusual, multi-media TV production of Mozart’s The Abduction From the Seraglio with the Camerata Salzburg. He has also participated in other such prestigious European festivals as the Maggio Musicale Fiorentino, Bregenz and Aix en Provence. His US festival appearances include Tanglewood, Blossom Music Festival, Aspen Music Festival, Bravo! Vail Valley Music Festival and the Grant Park Music Festival in downtown Chicago.

An experienced opera conductor, Mr. Graf first conducted the Vienna State Opera in 1981 and has since led productions in the opera houses of Berlin, Munich, Paris and Rome among others. His extensive opera repertoire includes several world premieres. Recent opera engagements include Parsifal at the Zurich Opera and Boris Godunov at the Opera National du Rhin in Strasbourg.

Hans Graf has recorded for the EMI, Orfeo, CBC, Erato, Capriccio and JVC labels and his extensive discography includes the complete symphonies of Mozart and Schubert, the premiere recording of Zemlinsky’s opera Es war einmal and the complete orchestral works of Dutilleux, which he recorded under the supervision of the composer with the Orchestre National Bordeaux Aquitaine for BMG Arte Nova.  His recordings with the Houston Symphony include Bartok’s Wooden Prince for Koch International; Zemlinsky’s Lyric Symphony, Berg’s Three Pieces from the Lyric Suite and Mahler’s Das Lied von der Erde for Naxos; and a DVD of The Planets – An HD Odyssey, available through the Houston Symphony. His most recent recording is the complete works by Paul Hindemith for viola and orchestra with Tabea Zimmermann and the Deutsches Symphony Orchestra Berlin for Myrios.

Born near Linz, Hans Graf first studied violin and piano. After receiving diplomas in piano and conducting from the Musikhochschule in Graz, he continued his studies in Italy with Franco Ferrara and Sergui Celibadache and in Russia with Arvid Jansons. Mr. Graf has been awarded the Chevalier de l’Ordre de la Legion d’Honneur by the French government for championing French music around the world as well as the Grand Decoration of Honour in Gold for Services to the Republic of Austria. From October 2013 he will be a Professor of Orchestral Conducting at the University Mozarteum Salzburg. 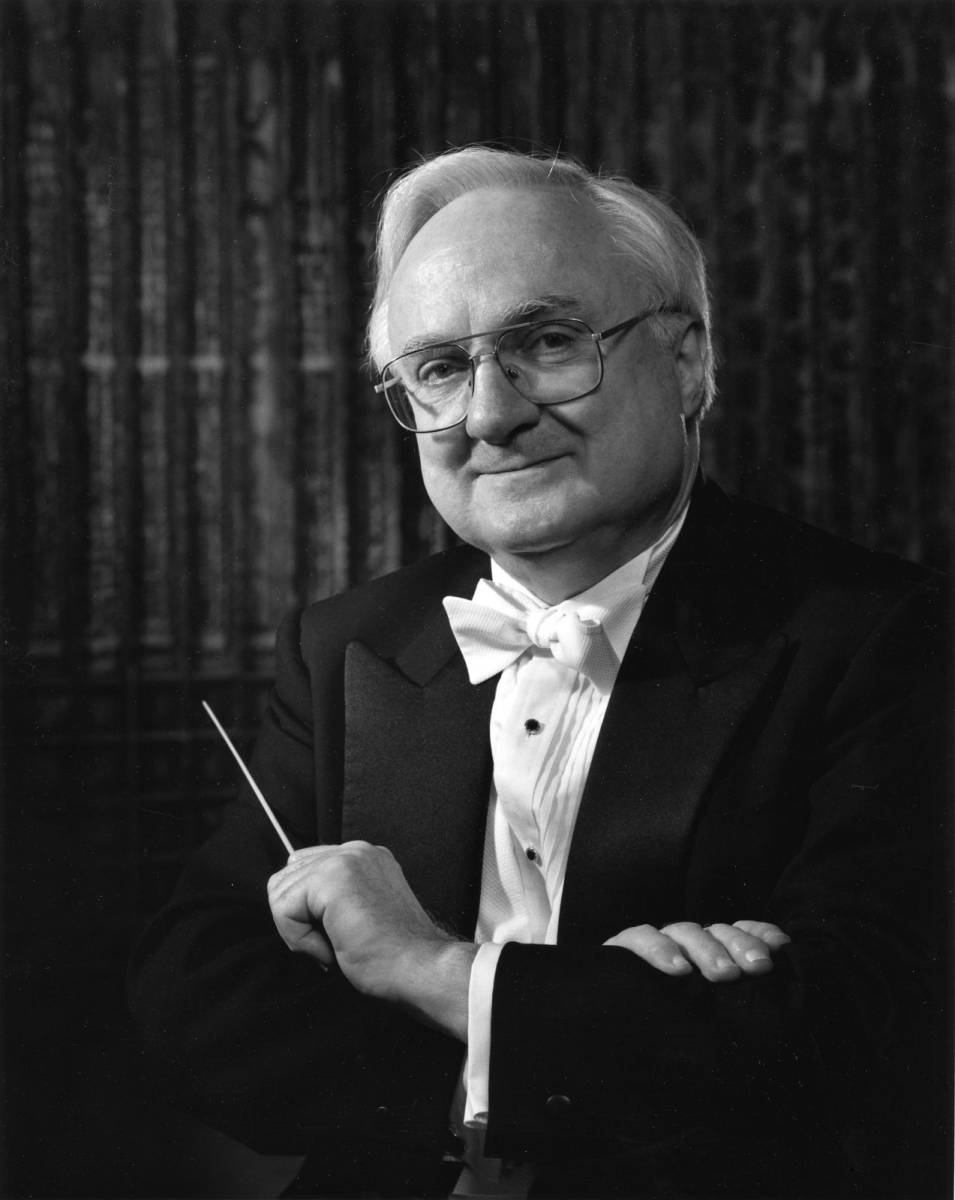 Mario Bernardi, former Principal Conductor of the CBC Vancouver Symphony and Conductor Laureate of the Calgary Philharmonic, was born in Canada of Italian heritage. He received his early musical training in Italy at the Venice Conservatory, returned to his native Canada to complete studies at the Royal Conservatory in Toronto, and went on to establish a considerable reputation as a pianist.

He made his operatic conducting debut in 1957 with the Canadian Opera Company’s production of Humperdinck’s Hansel and Gretel. Subsequent appearances in Canada led to an invitation in 1963 to conduct the Sadlers Wells Opera, where he was appointed Music Director in 1966. During this time, he made numerous guest appearances including debuts with the London Symphony and the Royal Philharmonic.

In 1984, Maestro Bernardi became the Music Director of the Calgary Philharmonic Orchestra, a position he held until 1992. During his tenure, the Calgary Philharmonic recorded a number of critically-acclaimed compact discs and rose to become one of the top orchestras in Canada. Maestro’s Bernardi’s guest conducting appearances take him throughout the world, and he continues to record with all major Canadian orchestras.